In a remote corner of Death Valley National park, cradled in between the Cottonwood and Last Chance mountain ranges, Racetrack Playa presents an intriguing natural history mystery. Here, slabs of dolomite and syenite, ranging in size from a couple of pounds up to 1,000 pounds, leave visible tracks as they slide across the playa surface, without any sign of human or animal intervention. For decades visitors and scientists alike have puzzled over what natural forces cause the stones to move across the playa.

Theories have ranged from the plausible (Death Valley National Park’s website has for years suggested that rain will wet the playa providing a slippery surface across which very strong winds may skid the stones across the slick mud) to the supernatural (strange magnetic forces or psychic energy as the culprit behind the sailing stones mysterious behavior). Unfortunately, as the stones had never been seen moving, the mystery had remained just that. Until now.

In a paper published with the scientific Journal Plos One, researchers Richard D. Norris and James M. Norris have provided photographic and scientific evidence as to how the stones manage to sail in their erratic patterns across the smooth playa surface. 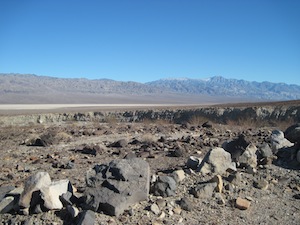 "The number of historic and recreational destinations along the Nadeau Trail is truly astounding. It's no wonder this public treasure was aptly recognized as a National Recreation Trail," said Randy Banis, editor of DeathValley.com. "Travelers of the Nadeau Trail have long enjoyed the trail's ghost towns, abandoned mines, historic ruins and structures, seeps and springs, and solitude and remoteness. Some of my favorite destinations along the Nadeau Trail are Lookout City, the Defense Mine, the Minnietta Mine complex, Snow Canyon and the Ash Hills."

The Nadeau National Recreation Trail is a piece of living history that exists much as it did in the mid-1800s when French Canadian pioneer Remi Nadeau and his teamsters used it haul silver and supplies to and from the Cerro Gordo area. Numerous motorized routes connected to the Nadeau Trail provide access to hiking trails, spectacular vistas, history seeking, and camping opportunities.

This year marks the 100 year anniversary of the day we set the world record for hottest place on earth. Keep an eye here for the latest news and updates.

We Celebrate The Heat!

On July 10th, 1913 Death Valley set the record for highest reliably recorded air temperature on earth with a scorching 134°F (56.7°C). While for some this may be a mere point of interest, for us here in Death Valley it’s a point of pride and a thing to celebrate.

In honor of the day we won the title of Hottest Place on Earth the National Weather Service, Weather Underground, and Death Valley National Park held, arguably, the hottest celebration on earth. About 140 people braved the 90+ degree temperatures to listen to rangers, metorologists and other experts talk about the record-setting temperature and other significant meteorological events in Death Valley's past.

If you missed the celebration, but still want a t-shirt, they can still be purchased in person at either the Furnace Creek Visitors Center or online via the Death Valley Natural History Association's website.

Hot Enough For You, now?

Even by Death Valley standards it has been HOT this summer. After some initial confusion, the high in June was documented at 129°F (Photographic evidence can be seen here). If certified, this will tie the June 23, 1902 record held by Volcano, a town that once existed near the Salton Sea, for hottest temperature ever recorded in June in the United States. Even for Death Valley it is unusually hot!

Does these record temperature mean that we may break our own record and top 134 this year? It’s anybody’s guess.

Either way, it’s going to be a scorching summer, so be sure to be prepared for the heat when you travel through the valley. Carry lots of water, wear wide brimmed hats, and loose fitting, light-colored clothing and, when possible, stay out of the sun.

I know that's a tall order here in Death Valley, but given our recent certification as a Dark Sky Park, we think you'll manage to find something to do and see in the evening and night-time hours.

It Ain't Getting Any Cooler!

Death Valley recently had a heat-streak, with five consecutive days having been over 120°F. The current record for death valley is 43 consecutive days with the temperature at or above 120°F, with 52 days total for that year (1917). Given the early heatwaves we've experienced this year here in the Mojave Desert, one dares to venture the possibility that we may surpass the 1917 record. Keep an eye here, we'll be updating this as the summer develops.

New DV Superintendent and Other News From the Valley

You can read more about the new park superintendent by clicking here.

Stand in the valley and look up: Death Valley National Park has received international Dark-Sky Association certification. Death valley joins only two other U.S. National Parks (Big Bend National Park and Natural Bridges National Monument are the other two) in receiving dark sky certification, affirming what we who visit it regularly already knew: that those skies give some of the best night sky viewing in the United States.

Read more: New DV Superintendent and Other News From the Valley